Why so little rain? First, at 31 degrees latitude the Negev is well within the belt where deserts tend to form in the Northern Hemisphere. There are two such belts, north and south. The reason is as follows: The region of the equator gets the most direct sunlight, which heats the air. "Hot air has two important qualities: it can hold enormous quantities of moisture, and it rises up into the atmosphere. So hot tropical air tends to be moist and rise into the atmosphere. As this air rises it cools, condensing the moisture and converting it to water where it falls as rain. This is why rain forests tend to occur near the equator. What goes up must come down, and gravity pulls this mass of rising air back to the ground. Tropical air typically falls at about 30 degrees latitude on either side of the equator and along the desert belt, but robbed of its moisture it is now hot and dry. The result is often persistent high pressure systems that tend to block incoming storms, or push them into other regions." (U.S. National Park Service.) 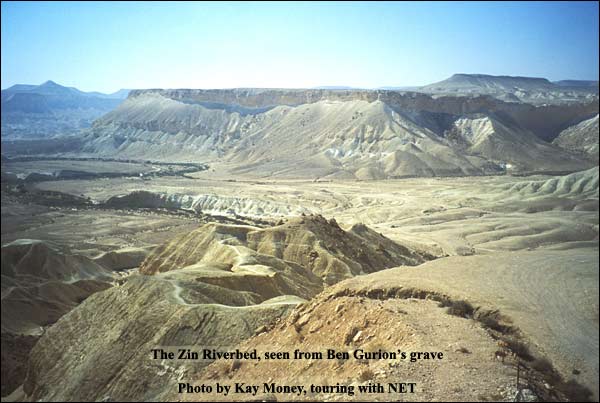 Furthermore, the great supplier of rain for the Holy Land is the Mediterranean. Yet the part of the Negev that is south of the Ramon Crater lacks this sea to its west. Instead it has the Sinai desert and, farther west, the Sahara. What's more, even when the wind blows from the northwest, most of the Negev lies too far from the sea to receive much rain. There are spectacular examples of erosion in the Negev, but falling rain had only a small part in their making. They are rather the result of fallen rain (springs and pools), together with other factors, among them the steep decline of the central and eastern Negev toward the Dead Sea TransformThis rip in the earth's crust belongs to the divergence of the Asian and African tectonic plates. The Transform extends about 600 miles from the southern edge of Turkey to the Red Sea, reaching its deepest point – indeed, the deepest point on the face of the earth – at the Dead Sea (about 400 meters below world sea level).. Driving southward, the first example we encounter is the deep cut in the riverbed called Zin. (The modern Israelis gave it that Biblical name.) From the grave of David Ben Gurion, Israel's first Prime Minister, we can get a good view of this rift, as in the photo above. 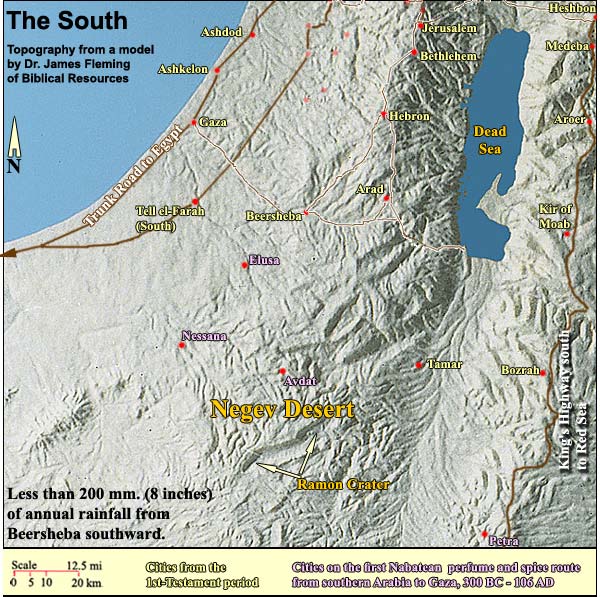 A short hike to Ein Avdat, followed by an optional climb After driving down into the riverbed, we can take a short hike to Ein Avdat, "the spring of Avdat," near the place where the rift begins. During this little walk, one may stop and rest in the shade and hear a word out of the wilderness tradition. (See, for instance, Word versus Earth in the Experience of Ancient Israel.) Then we arrive at a pool, with the spring water trickling down: 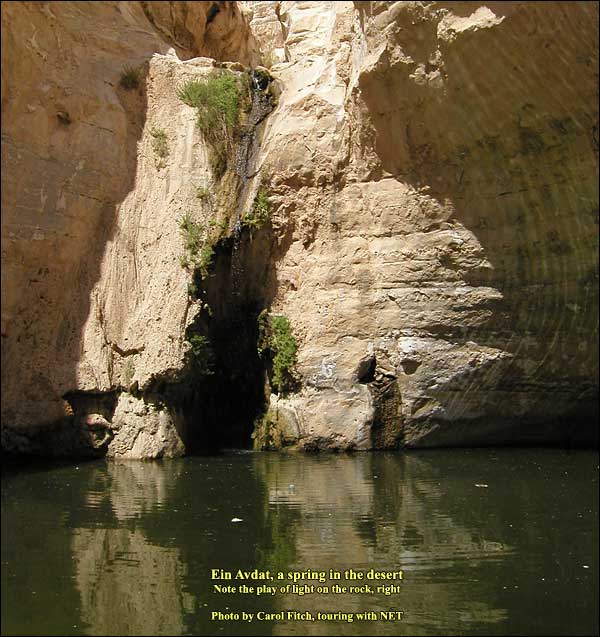