Coming west from Petra,  a caravan would stop in Avdat, whence it could proceed to Nessana and Egypt or northwest to Elusa and Gaza. 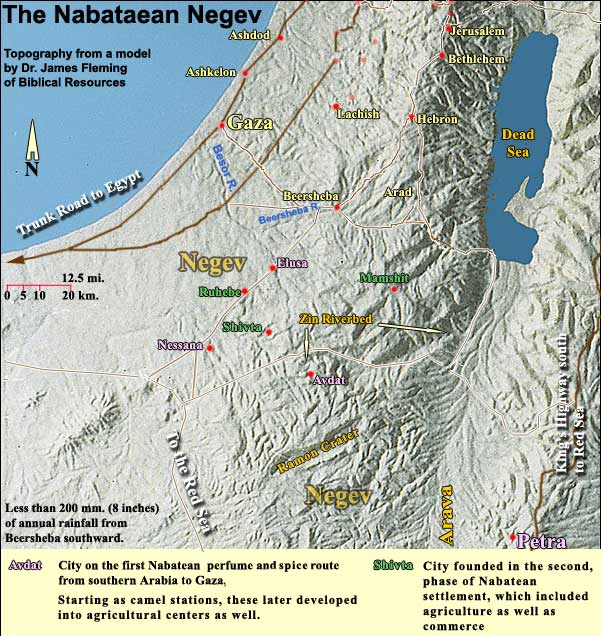 After amassing much wealth from this enterprise, the Nabataeans underwent a social revolution in the 2nd century BC. Whereas before they had outlawed agriculture and the building of houses, believing that such possessions made people vulnerable to the mafia, they had reached a point where they had become the mafia. Or at least some among them had, especially a godfather entitled Aretas, who around 168 BC was named their first king. By the end of the 1st century BC, they had gone into sowing and building. The former camel stations, Avdat, Nessana and Elusa, developed into major cities. In the 1st century AD, Shivta (Subeiba) was added (see map above), and perhaps Ruhebe (Rehovoth: the date of its founding is still uncertain). Mamshit (Mampsis) became a full-scale Nabataean city only after 106 AD, that is, after the Romans had annexed the Nabataean realm, shifting the trade route to the Via Nova Traiana (Trajan's New Way). Mamshit sat then on the important side road from Petra to Hebron and Jerusalem. A tour of Avdat There is an good 8-minute film at the Visitors' Center in the lower parking lot. On the way up to the acropolis, we see to the right an ornate tomb, which French researchers called the "Tomb of Obodas." The name Avdat derives from a Nabataean king named Obodas, either Obodas I (ca. 96 - 85 BC) or Obodas III (30 - 9 BC). (More on this question.) Uranios, a geographer of the 1st century AD, wrote that the Nabataeans deified Obodas and that his grave is here. We cannot be certain which king transformed the place from a camel station into a city, but the bulk of the work, it is clear, was done in the time of Aretas IV (9 AD - 40 AD, the same Aretas whose ethnarch tried to nab the apostle Paul in Damascus). On reaching the upper parking lot, we ascend a Roman tower, completely preserved. It was so strongly built that it survived the 4th-century earthquake that brought down the houses around it. In an inscription over the door, the builder seeks the grace of Zeus-Obodas. He also gives the date, equivalent to 294 AD. The Roman city here  endured from 250 - 320 AD. It reflected an expansion of the Empire's southern defenses toward the edge of the habitable desert. From the tower we get a view of the acropolis. The Byzantines refurbished it, and most of what we see today belonged to them. The platform on the west, however, where the many pillars stand, was originally Nabataean, built to accommodate their temple. 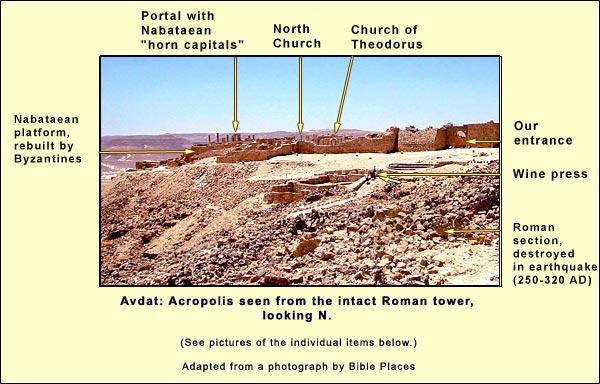 We walk through the Roman ruins to the wine press. With less than 100 mm. of rain, where could the grapes have come from? The answer lies nearby. We see, south of the press, an experimental farm founded by Michael Evenari. 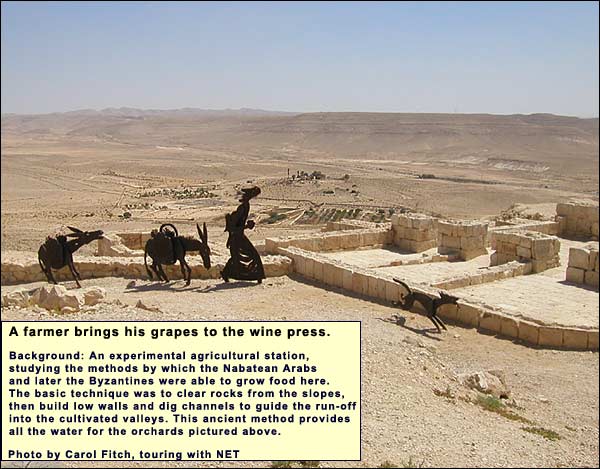 Evenari and his colleagues used Nabataean techniques, clearing the slopes and guiding run-off into the valleys, where vineyards and orchards waited. This run-off alone supplies the orchards we see in the photo above. We can imagine the same on a large scale throughout the area.  When the Nabataeans lost their monopoly on trade, they tried to maintain the desert cities by means of the sophisticated farming techniques. But no city long survives in the desert without good reason. After Trajan built the Via Nova Traiana east of the Jordan rift, that reason was lost for Avdat. The Byzantines found a new reason in the fifth century: to provide for caravans of pilgrims traveling between Jerusalem and St. Catherine's Monastery in Sinai. They restored and expanded the farms. It was they, no doubt, who installed the wine press. Having tread our grapes, we walk north toward a gate in the acropolis:

We enter a large courtyard, in the middle of which is a cistern that can hold 200 cubic metersOne cubic meter = 1000 liters. One liter = 1.056 liquid quarts.. Donkeys would have hauled the water in for storage as a safety precaution, in case of siege. The concept was that any besiegers would run out of water long before the people sheltering here.  From the northwest corner of the courtyard, we can spot, through two gates, the corner of the acropolis, as in the photo below on the left. Where we see today a line of acacias in a wadi, we may picture a Nabataean caravan en route to Elusa and Gaza, or later a Byzantine pilgrim caravan returning from Sinai to Jerusalem. From the same spot, turning north (picture below, right), we can find the northern rim of the Zin riverbed above Ein Avdat. 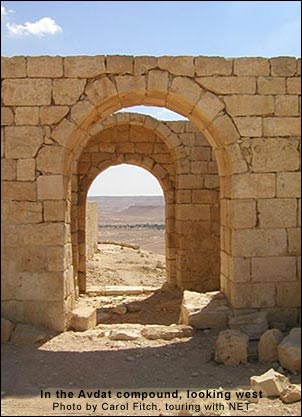 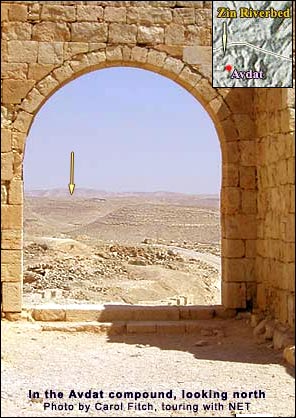 We use the middle gate in the courtyard's western wall and enter the western section. On the south side we find the Church of Saint Theodorus.  It is a basilica, facing east. The raised floor of the central apse contains the remains of an altar. At the level of the congregation, there is a small round platform for the preacher. There were no seats. People would normally stand throughout the Byzantine service, which sometimes lasted for seven hours or more. "And now we are entered on our travail and anguish," wrote Paul of Aleppo in the 17th century on entering Orthodox Russia (which preserved many of the Byzantine ways), "For all their churches are empty of seats. There is not one, even for the bishop; you see the people all through the service standing like rocks... God help us for the length of their prayers and chants and Masses, for we suffered great pain, so that our very souls were tortured with fatigue and anguish." (Ridding,Lady Laura Ridding, ed., The Travels of Macarius, London, 1936. p. 14) Four men were buried beneath the floor of the church, whose stone pavement includes their tombstones. These give dates, ranging from 541 AD until 618. The church must have been built, then, by 541. Just after 618, the Persians invaded this part of the country and put an end to Avdat. The uppermost archaeological stratum in the church consisted of ash from the wooden roof. One of the tombstones, remembering a 17-year-old named Germanos, is of special interest. At the bottom of the inscription is a seven-branched candelabra (menora), the definitive symbol of Judaism in antiquity, but it is flanked by two crosses. This is an enigma. One might think, "A Jewish Christian!" But already in 180 AD, the Church Father Irenaeus had established it as a heresy to retain one's Judaism after converting to Christianity. A heretic would not have been buried in a church. 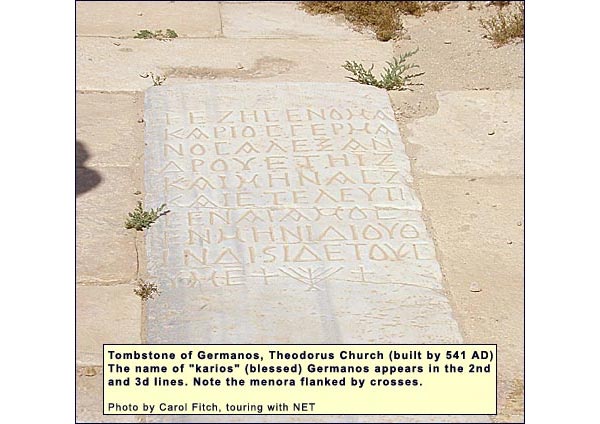 Leaving the Theodorus church and its riddle, we encounter on the west a reconstructed portal, which opens onto a platform built by the Nabataeans for their temple and re-used by the Romans for the same purpose. The portal contains two Nabataean "horn capitals," such as abound in Petra. This is a simple, bare-faced capital whose four corners spring out like horns, between which a small boss pokes. The lintel includes the engraving of a typical Roman sign with ear-like projections on its sides (originally such signs were made of wood, and nails were driven beneath the "ears"). Dating from 268 AD, the inscription includes a phrase (no longer visible), "All the friends of Obodas." (Keel,Othmar Keel, Max Kuechler and Christoph Uehlinger, Orte und Landschaften der Bibel, Koeln: Benziger and Goettingen: Vandenhoeck and Ruprecht, 1984. Volumes I and II. p. 331.) On the north side of the platform is a cross-shaped baptistry, lined with marble slabs. It belonged to yet another church a few steps to the east. 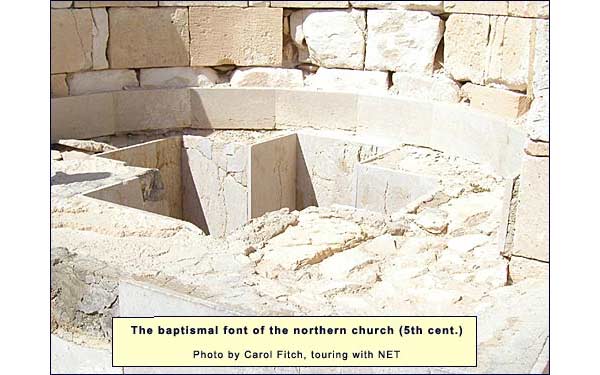 The atrium of this northern church contains a cistern, in which were found the pieces of the pillars that have now been reconstructed. The single apse includes a bench for the priests, and the presiding priest has his own seat in the middle. Here at least the clergy were permitted to sit. As in the Church of Theodorus, the uppermost layer that the excavators found was ash from the wooden roof. From this North Church we can see, on the slope north of us, the openings of about 300 caves cut into the soft stone. These were dwellings, or the back rooms of such, in the Byzantine period. Some, no doubt, served as lodgings for pilgrims on the route between Sinai and Jerusalem. The residential part of the city extended down the slope, due west of the acropolis, to a bathhouse near today's highway. At the southwest end of the acropolis we find a staircase leading down through a house into another area of caves, a few of which can be visited. The lowest was the winery of a house. In its back room is a broad shelf with scoops, as in an egg container, to hold jars in which grape juice would ferment. 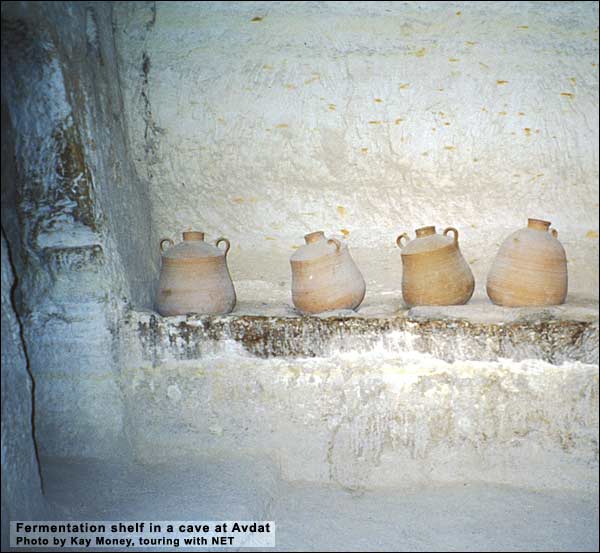 The Persians invaded between 618 and 620, putting an end to Avdat. The bathhouse at the foot of the city (a bit north of today's gas station), contained a small spring where Beduin stopped through the ages. They preserved the name Avdat. (Keel,Othmar Keel, Max Kuechler and Christoph Uehlinger, Orte und Landschaften der Bibel, Koeln: Benziger and Goettingen: Vandenhoeck and Ruprecht, 1984. Volumes I and II. p. 319.) Logistics: Throughout the Negev, don't leave valuables in the bus or car! Avdat is a national park. Telephone: 08-6555684 Nature Reserves and National Parks (Main office: 02/500-5444) Opening hours:   April 1 through September 30, from 8.00 - 17.00. (Entrance until 16.00)*