The first view of the city arouses therefore, in the hearts of Muslim, Christian and Jew, the strongest of emotions. Just as the Holy Land and its Holy City inspire claims and counterclaims, so they engender a wide range of theories. For example, Lebanese historian Kamal Salibi argues that the ancestors of the Jews, in the First Temple period, did not live in this land at all; he finds evidence for nearly all the Biblical place-names, including Jerusalem, in the Arabian peninsula. Another theory outside the consensus is that of Ernest L. Martin. He agrees with most scholars that the massive structure containing the Dome of the Rock and the al-Aqsa Mosque dates from the time of Herod the Great. He holds, however, that it did not encompass the Temple, of which "not a stone remains" (cf. Mark 13:1-2As he went out of the temple, one of his disciples said to him, “Teacher, see what kind of stones and what kind of buildings!” Jesus said to him, “Do you see these great buildings? There will not be left here one stone on another, which will not be thrown down.”). Martin argues that the Temple lay farther south, high above the Gihon spring, and that the mighty structure we see today belonged to a Roman fortress. In this website we have chosen to remain within the scholarly consensus: With fertile soil, a dependable spring, and deep valleys defending it on all but one of its sides, Jerusalem was already a formidable city 4000 years ago -- enough to provoke an ancient Egyptian curse! (It appears in the Execration TextsThe Egyptians wrote the names of their enemies on clay figures, which they then smashed or maltreated, hoping that a similar fate would befall those designated..) One millennium later, David set eyes on it. It straddled the border between his home tribe of Judah and the northern tribes, an ideal place around which to re-unite Israel. Here his son Solomon built the Temple. Destroyed by the Babylonians, rebuilt by returning Jewish exiles, reconstructed by Herod, the Temple was the main center for pilgrimage when Jesus made his journey to Jerusalem in 30 AD. Forty years later that Temple was gone, but for Christians the event of salvation had occurred, drawing them to Jerusalem ever after. The city remains holy to the Jews as well. Three times daily, for thousands of years, they have turned toward it in prayer, seeking the restoration of the Temple. As for Muslims, they name Jerusalem "the holy," al-Quds. It includes the Koran's "farthest mosque" (Arabic al-Aqsa), from which Muhammad ascended to heaven. The places we associate with these events are accessible today. We can stand on the Mount of Olives overlooking the city, as Jesus did when he foresaw its fate and wept. We can find quiet time in the Garden of Gethsemane. The Old City walls enfold a world of religious and historical significance: the Via Dolorosa, Calvary, the Holy Sepulcher. We can visit the Western ("Wailing") Wall, where Jews have prayed for centuries. Or ascend to the Dome of the Rock, more than 1300 years old, sheltering the huge slab of exposed bedrock where many archaeologists think the Holy of Holies was located, and from which Muslims believe Muhammad made his ascent. Just north of the Old City wall is the Garden Tomb, where many Protestants celebrate the resurrection of Jesus. 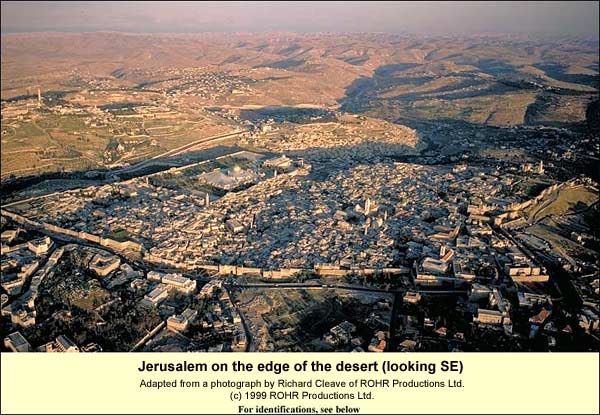 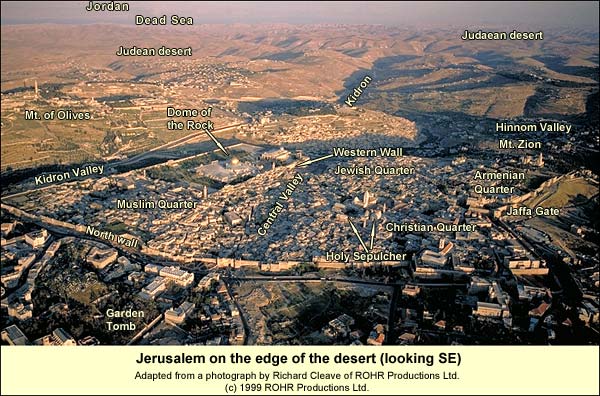 If you want to view this material on a live tour guided by Dr. Steve Langfur, please start here .