Because of the warm spring water, it is an excellent place to cast the net for tilapia, a tasty fishPeter's Fish:The northern shore of the Lake of Galilee is a favorite haunt of tilapia galilaea, today called Peter's fish, a culinary favorite then as now. Tilapia is found in nature only here and in the lakes of eastern Africa, such as Lake Victoria. The tilapia prefer to school near the springs at Tabgha, perhaps because they are warm. of tropical origin. Fishermen 2000 years ago must have often worked off its shore. The hill slope undulates, making a natural theatre, where thousands could listen to a preacher standing in a borrowed boat.

Ancient traditions of Jesus are preserved in two churches at Tabgha:

Church of the Multiplication of Loaves and Fishes The church contains fifth-century mosaics. According to Jerome Murphy-O'ConnorJerome Murphy-O'Connor, The Holy Land: An Archaeological Guide, 4th edition. London: Oxford, 1998 (p. 278) this is the earliest-known figural pavement in Palestinian church art. Most of it consists of graceful scenes from the Nile, which were popular throughout the ancient world: ducks on bell-like lotus blossoms, a battle between a goose and a snake, the Nilometer (a slim tower for measuring the height of the Nile at flood, in order to determine the height of expected prosperity and hence that of taxes). One mosaic was made specifically for this church: at the foot of the altar are two fish and four loaves of bread. Why only four? The idea, perhaps, was that the fifth would be on the altar. 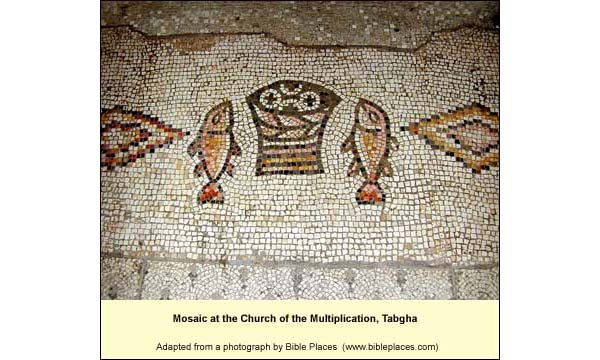 Beneath the altar is a crude black stone. It was once a large table-like rock, upon which Jesus was thought to have placed the loaves and fishes. The 4th-century nun EgeriaName uncertain. A nun from the Atlantic coast, perhaps Spain, who visited the Holy Land in the late 4th century and described her journey in Latin for the sisters at home. She had a special interest in churches and Christian ritual. Only the middle of her Travels has survived, but it is a unique and valuable source writes: "In fact the stone on which the Lord placed the bread has now been made into an altar. People who go there take away small pieces of the stone to bring them prosperity, and they are very effective." The stone, unfortunately, did not grow apace.  The church Egeria saw did not have the dimensions of this one. It was smaller and built on a slightly different axis. A piece of its wall can be seen beneath a slab of plastic. We know that Constantine the Great commissioned a convert from Judaism, Count Joseph of Tiberias, to build churches in Galilee for pilgrims, and this was likely one of them. After a century, however, Christians replaced it with a church of the present dimensions, including the mosaics. In 1982 the Benedictine Order finished the present restoration, following the outlines of the 5th-century church and using knowledge accumulated from digs all over the country. In the atrium, where "seekers" once pursued their studies in order to qualify as Christians, there is today a lovely fountain: one of the springs. 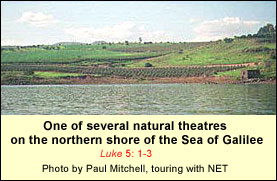 Logistics: As of March 2019, the church keeps regular hours on weekdays (0800-1645), but closes at 14:45 on Saturday and opens at 11:00 on Sunday: Phone: 04-6678100. Modest dressShoulders covered, legs covered below the knees required). Church of the Primacy of Peter Just east of the Multiplication church is the Franciscan Church of the Primacy of Peter (open 8.00 - 17.00; modest dress required). Phone: 04-6724767. For at least 1600 years, Christians have remembered here another feeding: the post-resurrection breakfast that Jesus baked for his disciples. They had gone back to being fishers of fish, and from here he sent them out again to be fishers of men. One may begin with Luke 5, his first meeting with Peter, and then proceed to the breakfast in John 21. Why breakfast? Because they usually worked at night, when the fish couldn't see the nets. 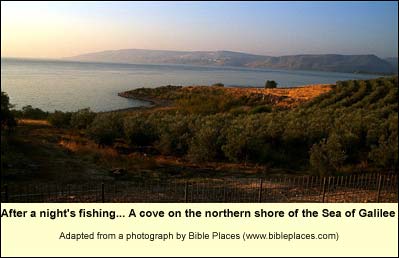 On the shore or in the water, depending on season and year, lie six heart-shaped stones, each accommodating two persons. These "thrones of the apostles" were segments of a pillar at the corner of a basilica. Beside them are steps carved into the rock. Egeria saw them too: "Not far away from there (Capernaum) are some stone steps where the Lord stood." Inside the modest basalt church is another table-like basalt boulder, in better shape than its neighbor at the Multiplication. Between these two churches, on the north side of the modern road, appear the ruins of yet another: the original Church of the Beatitudes. Here the Byzantines located the sermon. Here too we have help from Egeria: "Past the walls of this church (of the Multiplication) goes the public highway on which the Apostle Matthew had his place of custom. Near there on a mountain is the cave to which the Saviour climbed and spoke the Beatitudes." The cave is probably the one on the same slope a bit to the east. 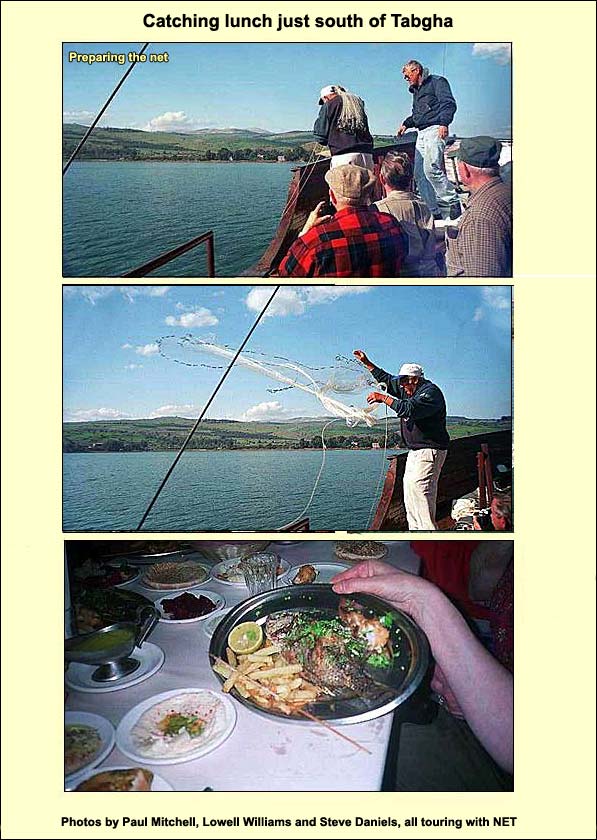