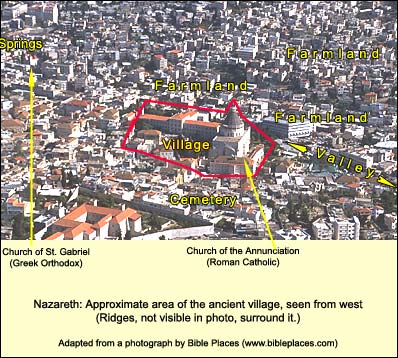 Today Nazareth is the largest Arab city in Israel, numbering 76,000 (70% Muslims and 30% Christians). The conical dome of the Roman Catholic Church of the Annunciation stands out among many smaller buildings, a constant landmark. Just north of it stands the Church of St. Joseph. The Franciscan property containing these churches probably covers most of the ancient village. Just to the west (where Casa Nova is today) was the cemetery. To the east was a valley (now Pope Paul VI street) and then a large field. About 500 yards outside the town, at the base of the northern slope, there are three springs whose water is channeled today into the Greek Orthodox Church of St. Gabriel. 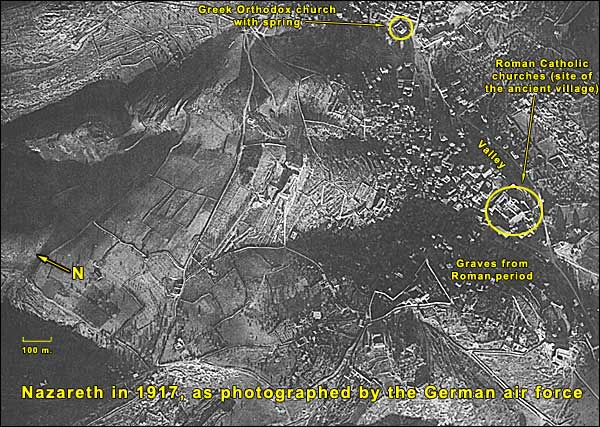 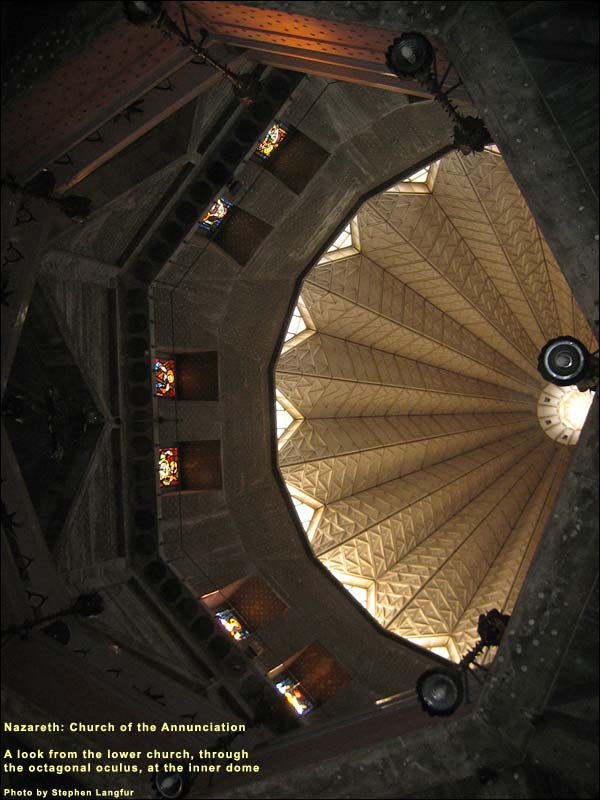 {mospagebreak title=The Spring}The spring in the Church of St. GabrielAt the base of the northern slope are three springs, whose water flows 54 feet through a rock-cut channel into the Greek Orthodox Church of St. Gabriel (built in 1750, although containing Crusader remains). Here one can see and hear the water. It then continues underground for 500 feet to a structure called Mary's Well (first built in 1862 and now restored). This gushing water is significant for two reasons. First, it is Nazareth's biggest source, flowing at the rate of 1000 gallons per hour by winter's end (250 in summer). Although there were several smaller springs around the village, and people had cisterns in their homes as well, Mary might well have come to this spring with other women of the village to do the washing. In the West Bank today, many villages still lack piped water (not by choice!), and one sees the women at the major spring on laundry day. Around them their children play. So you have at once the music of the spring, the talk of the women and the squealing of the children. That would have been the scene here also, 2000 years ago. Today we still have the music of the spring. Secondly, there is an ancient tradition about this spring. In the Protoevangelium of James, a non-canonical gospel dating to the second century, we read that Mary was one of seven unblemished virgins from the line of David who were supposed to weave a new curtain for the Holy of Holies in the Temple. It was her task to spin purple and scarlet threads. (That is why, in the iconography, she is sometimes depicted spinning.) And then we read: "She took the jar and went out to fetch water. Then a voice spoke to her: 'Greetings, you who have received grace. The Lord is with you, you blessed among women.' She looked right and left to see where the voice came from and began to tremble. Then she went back into the house, put the jar aside, sat down, took the purple and began to spin. Then an angel stepped before her..." 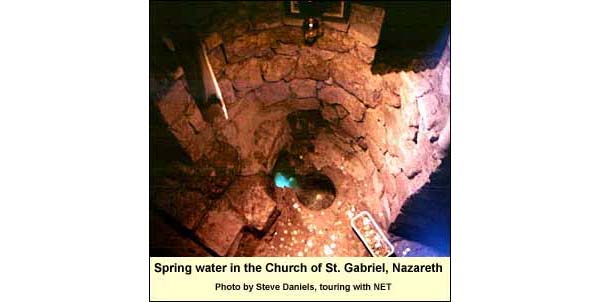 The rest follows as in Luke 1:26-38.   It doesn't say, of course, that Mary went so far as the spring. (In fact, Nazareth isn't mentioned in the Protoevangelium of James; the scene takes place near the Temple in Jerusalem.) The tradition developed, nonetheless, that the first Annunciation occurred here. There is also a logic in its happening near the spring. When we remember the First Testament passages where a stranger addresses a woman, it is done with propriety at a spring or well, for this is a public place. At the watering spot, Abraham's servant finds a bride for Isaac. So Jacob meets Rachel, and Moses, Zipporah. So too, Gabriel. Angels had not yet developed wings. {mospagebreak title=Ridge view }The View from the Nazareth RidgeOn the ridge south of Nazareth there is a marvelous panorama over the Jezreel Plain. We can see, from east to west (left to right): the southern rim of the Sea of Galilee, Mt. Tabor (the mountain of the Transfiguration), the dip into the Jordan valley with the Kingdom of Jordan beyond it, En Dor (where Saul consulted with the witch), the Hill of Moreh (due south), and near the base, in the middle, the village of Nain (where Jesus raised from death the only son of a widow). 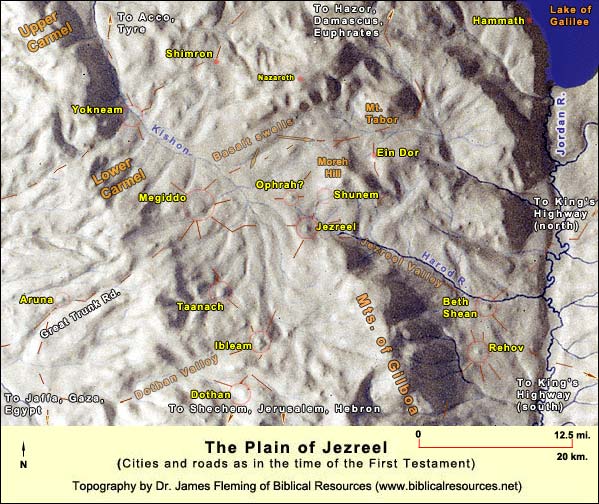 On the western side of Moreh is part of Afula, a modern Jewish city, and just beyond it one can see a sliver of Mt. Gilboa, with the central mountain range behind it. To the right the plain stretches southward toward Jenin in the West Bank. On the far right one can make out a V in a distant mountain ridge: it is the pass that comes out by Megiddo, which lies just to the right of the V. Below us spreads an Arab village called Iksal, site of the village Exaloth in the Roman period. From here one can see how the Canaanites, possessing the plain, cut the Israelite tribes off from one another, so that "travelers went by roundabout ways" (Judges 5: 6) until Deborah "arose, a mother in Israel" (Ju.5:7). Judges 4, Judges 5. There are many fish ponds and reservoirs: the natural drainage is poor, and unless such measures are taken, rain turns much of the plain to bog and swamp. The Canaanite general, Sisera, committing his 900 iron chariots to the field (Judges 4:3), must not have expected rain. Perhaps the battle occurred outside the rainy season. That would explain why Barak, the Israelite general, insisted that Deborah be present (Judges 4:8): he wanted the prophetess to signal the coming of the miraculous rain. It came, we are told, "from Seir... from the field of Edom" (Judges 5:4), today the area of southern Jordan and the western coast of Saudi Arabia.  Just to our right (west), as part of the ridge on which we stand, we can see a gray promontory. In local tradition, this is the place from which the people of the Nazareth synagogue meant to throw Jesus (textLuke  4:14-31And Jesus returned to Galilee in the power of the Spirit, and news about Him spread through all the surrounding district. And He began teaching in their synagogues and was praised by all.). 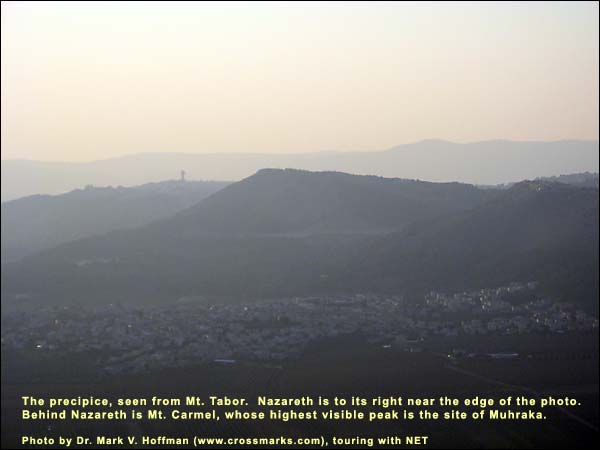 If you want to view this material on a live tour guided by Dr. Steve Langfur, please start here .

{mospagebreak title=Logistics}Logistics  The churches require modest dress. Visiting hours: The Roman Catholic Church of the Annunciation  and St. Joseph's Church (Telephone: 04/6572501) 8.00 - 18:00Limited rest rooms are available at the end of the visit, just before the exit. The Greek Orthodox Church of St. Gabriel, containing the spring (Telephone: 04/6576437) Open: 8.00 - 12.00, 13.00 - 17.00, but on Sundays or holidays phone in advance. If you are satisfied with your visit, you may leave a donation for the church at the door. Time permitting, it is good to walk between these two churches through the colorful suk (bazaar), which is intended not so much for tourists as for the local inhabitants. These narrow alleys are the oldest part of Arab Nazareth, although the more ancient village of Jesus' youth was confined to the hill between St. Joseph's Church and the Roman Catholic Church of the Annunciation.