Hammat Tiberias and its synagogues

Since Jesus was a healer, and since many sick people used to come to the hot springs, it is reasonable to suppose that their presence nearby was a factor in his choosing to focus his public mission in the area of the lake. Yet why not nearer to the springs? Why on the north shore? The answer may lie in the fact that the tetrarch Herod Antipas had established his capital in Tiberias, founded by him around 20 AD. Antipas imprisoned and beheaded John the Baptist. "Now when Jesus heard that John was delivered up, he withdrew into Galilee. cb(4,13); Leaving Nazareth, he came and lived in Capernaum..." (Matthew 4:12-13). Perhaps Jesus did not want a similar fate to interrupt his mission at its start. By using Capernaum as his base, he could remain in a region that was largely Jewish, but if Antipas went after him too, he could quickly move by boat to the nearby territory of Antipas's half-brother and rival, Herod Philip. Capernaum was the closest town on the lake to Philip's domain on the other side of the Jordan River. We may also recall that in Matthew, Mark and Luke - the Synoptic Gospels - Jesus is very reticent about his messiahship. He goes all the way up to Caesarea Philippi, Philip's largely pagan capital, for a conversation that lets his identity out, and he warns his disciples not to tell anyone. 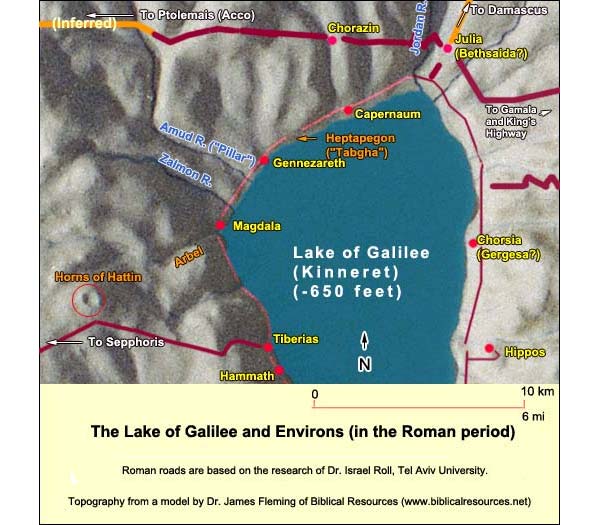 While building a road to the modern Tiberias in 1920-21, workers found the ruins of Hammath. An excavator then discovered a synagogue, which was dated as in use from the third to the fifth centuries AD, including a seven-branched candelabrum (menorah) carved out of limestone and complete with holes for oil. (Photo of this.) In 1947, while workmen were expanding a modern bathhouse, they discovered more of the city, including another synagogue. Systematic excavation began only in 1961. The diggers found a series of synagogues built one on top of the other. The earliest building, dating from the first century AD, may have had another use, but the next, built in the fourth century (according to the redating by MagnessJodi Magness, "Heaven on Earth: Helios and the Zodiac Cycle in Ancient Palestinian Synagogues," Dumbarton Oaks Papers, Vol. 59, 2005, p. 13), was identified as a synagogue. It fell in that century, perhaps in the earthquake of 363. On its ruins arose the synagogue whose mosaic floor is the main attraction of the site today. Its largest "carpet" shows the signs of the zodiac (the name of each is written beside it in Hebrew, sometimes misspelled) and, in the center, pictured as riding through the sky, is Helios, god of the sun. 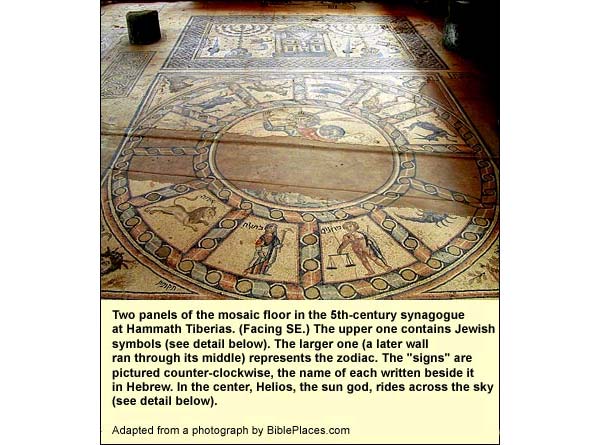 Such symbols in a synagogue may arouse surprise, but we find the zodiac elsewhere too: at Beit Alpha, Sepphoris, Husifa on Mt. Carmel, and Na'aran near Jericho. There seem to be traces of it at Susiya in the Hebron hills and Yafia near Nazareth. The astrological signs are listed in an inscription from the synagogue at Ein Gedi. Most of these buildings presented modest facades to the world, saving their glory for the interior. From the same periods, there were also majestic synagogues in Roman style, built with columns and large dressed stones, for example, at Capernaum, Chorazin, Merot and Arbel. On the Golan Heights and in the Hebron area there were still further variations. Altogether, the remains of more than a hundred synagogues have been found, dating from the third to the eighth centuries. (Their presence contradicts the widespread notion that the Romans forcibly exiled the Jews from the land. See the note on Bar Kokhba.) But isn't there a ban on images? And what is the sun god doing here? Is it "kosher" to busy oneself with the zodiac, that is, with astrology? And in a Jewish house of worship!?  On images. The Biblical text concerning images is straightforward:  "You shall not make for yourselves an idol, nor any image of anything that is in the heavens above, or that is in the earth beneath, or that is in the water under the earth:  you shall not bow yourself down to them, nor serve them, for I, Yahweh your God, am a jealous God, visiting the iniquity of the fathers on the children, on the third and on the fourth generation of those who hate me, and showing loving kindness to thousands of those who love me and keep my commandments." (Exodus 20:4-6)

In the period of the Second Temple (515 BC - 70 AD), the ban appears to have been taken literally. In the architecture, frescoes and mosaics at Jewish sites from this time we do not find images. (An exception: Josephus reports that Herod the Great placed a golden eagle over the gate of the Temple; pious Jews ripped it down (and were executed). WarThe Jewish War. Translated by William Whiston. (Abbreviated in text as War.) Book 1, Ch. 33). In the necropolis of Beth She'arim, however, which dates from the second to the fourth centuries AD, the limestone sarcophagi (including those of important rabbis) are decorated with images in sculptured relief, the exact kind of thing against which their ancestors had risked their lives in protest. And here at Hammath and elsewhere, we find images in the synagogue floors. How shall we explain this change? First, there is no doubt that they were synagogues, for Jewish motifs dominate the other mosaic panels. It seems that Greco-Roman culture had permeated the land so thoroughly, and images were so much a part of everyday life, that the discrepancy with the Biblical text did not bother the pious, if they noticed it at all. We have an indication from the Mishnah, concerning a rabbi who bathed where there was a statue of Aphrodite:

Proclos, son of a Philosophos, put a question to Rabbi Gamaliel in Acco, who was accustomed to bathe there in the bathhouse of Aphrodite. ..."Why are you bathing in the bathhouse of Aphrodite?" He responded to him, "We may not answer in a bath." When he came out, he said to him, "I did not enter inside her border, she has entered inside mine. Nobody says, 'The bath was made as an adornment for Aphrodite,' but he says, 'Aphrodite was made as an adornment for the bath.' And another thing: Even if someone were to give you a fortune to do it, you wouldn't approach an idol you revere while naked or after you'd experienced a seminal emission, nor would you urinate in front of it. But look, this statue stands beside a sewer, and everyone goes and urinates in front of it. ...When people behave toward something as a deity, then it is forbidden to us [Jews], but that to which people do not relate as a deity is permitted. (Mishnah, Nezikin, Avodah Zarah 3:4) 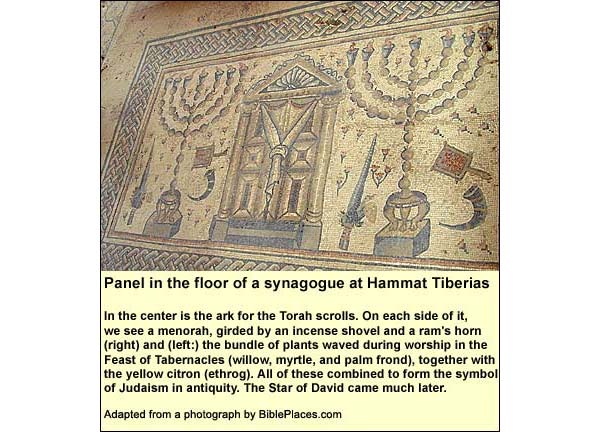